While planning your Round the World trip of a lifetime, you will often have people say ‘I have a friend who lives in Auckland, or an Auntie near Wellington, or a father in Dunedin! Some people would say ‘That’s nice’, where we say ‘Do you think they would host us?’ Staying with locals is in our opinion the best way to imagine living in another part of the world. Learning about everyday life is a lovely change from visiting tourist attractions and sleeping in hostels. In hostels you will meet like minded travellers, swap ideas and share stories. Living with a local, you will learn more than you could ever think about your destination and how everyday life takes shape for them. I recommend being bold, ask the question and take opportunities as they pop up to live like the locals do.

A good friend and work colleague, Annabel, put us in touch with her Auntie who was from the UK but set up a new life in New Zealand, 7 years after meeting the love of her life. Our host, Helen lived just outside of Feilding (above Wellington). ‘Friendly Feilding’ as it is known, has won the New Zealand’s Most Beautiful Town award 16 times! It is surrounded by farming districts and we had the pleasure of spending a long weekend there.

Although we were both brought up in Yorkshire, farm experience had never made it onto our resumes. With upcoming regional work in Australia, we were keen to get our hands dirty and learn something new! The task for the day was to move the sheep and newly born lambs from one paddock to another, for a taste of fresh grass. As much as we looked at the hand drawn map, planned the route and how we were going to position ourselves, we were completely confused. Helen reassured us that there was no rush and that it would all become clear. It was hilarious! It was all going so well until a couple of rebel sheep made a run for it! As we were herding them back to the gate, the majority of the sheep ran back into the field. ‘Lets start again’ we said. The second round, we had a lamb do a great escape through the fence, meaning its Mum went into flight mode, determined to get her new born back. Once quickly reunited, we managed to ‘hip-hop’ them the right way to their new change of scenery. We were rubbish but we got there in the end and it was lovely to see the sheep and lambs from the house.

It felt good to help out around the property for the weekend with raking dead leaves and the Mister, mowing the lawn and as a team moving garden furniture around. It was all going well until Duncan thought he had broke the ride on lawnmower! After panicking, troubleshooting every option he could think of and even trying to tow it back to shelter… he then realised the cutting blade was down so of course the engine wouldn’t start!

Since we arrived in New Zealand, we had been determined to see the rather unusual native Kiwi bird. This flightless bird is under threat of extinction as well as only appearing at night time. So in an effort to see the infamous Kiwi, we headed to the Wildbase Recovery National Wildlife Recovery Centre in Palmerston North. We were fortunate to have a tour with local farmers of the new facility prior to it opening. Although no animals (and no Kiwis!) had arrived yet, we saw the incredible potential for the recovery of animals through veterinary care and rehabilitations programmes. The Massey University Wildlife Specialists now provide world class care for native wildlife and release back into their natural environments. For me, Zoo’s haven’t got the same appeal as they once did. As we become more sensitive to wildlife and question confining animals to cages for our amusement, I feel wildlife conservations are a much better option. A happy medium between the two!

Helen was on a mission to get our eyes in front of a Kiwi, which we were extremely grateful for. Our next stop was the Pukaha Mount Bruce National Wildlife Centre in Masterton. For $20 entry, we had the pleasure of visiting an array of native animals and birds. We were so pleased to see a White Kiwi in it’s nocturnal house. Once we laid eyes on the rare native bird, we noticed how active she was in the day (which was her night). We were in time for the feeding of the Long Fin Eels, which the Mister bravely jumped at the chance to participate in! I thought the guide was joking at first, but when Duncan began to put overalls and wellies on, I soon realised he was going in! I watched from the viewing bridge over the stream as Duncan fed them from a giant spoon and even stroked them! 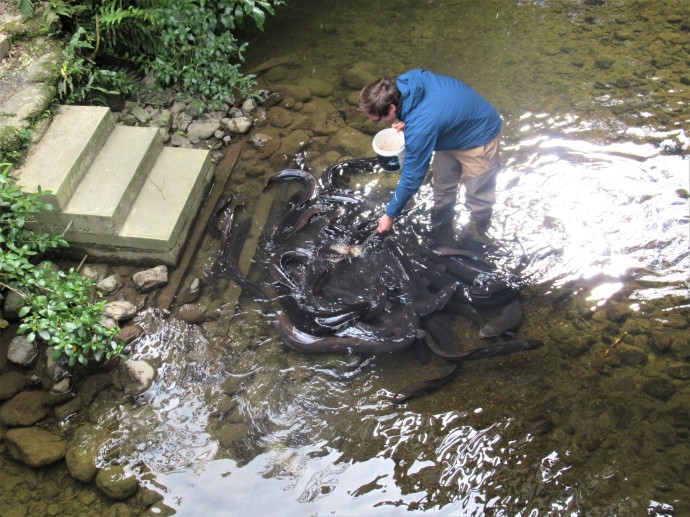 There was a fantastic loop walk around the park that reached a summit with serene views. It was then we noticed the sheer amount of possum traps. I didn’t realise that they were considered pests and are such a threat to their natural environment. They eat 20,000 tonnes of vegetation a night, and are multiplying by the second. The native birds, like the Kiwi, are competing for their food and they even eat their eggs.

A great way to end the day, especially for the Mister, was to head to a local Brewery! In the little village of Mangatainoka, just outside of Palmerston North is the legendary Tui Brewery. The quirky HisTui Museum is worth a nosey before sitting in front of the fire with a beer, or in my case cider. You will find Tui beer everywhere in New Zealand so worth stopping by on your road through North Island.

I cannot end this blog without mentioning the absolute feasts we were gifted with every evening at Helens! In ultimate Mum mode, she made sure we were well fed with delicious meals. We truly felt at home and thoroughly enjoyed getting to know you and appreciated your reassurance on the next part of our travels, with regional work in Australia. Inviting us back into your home on the way back meant a lot to us and I will never forget the mattress you cut up for us to fit in our campervan! We hope to see you and Ross in Australia, New Zealand or the UK in the future and we can return the favour with a big Sunday Roast!

Go the Distance on the Farm,

View all posts by Chloegoesthedistance

'Together is my favourite place to be' 😘
Only been a week since Sydney and I'm planning our next adventure! 🇦🇺 Determined to keep the balance between Working and Holiday while on the WHV ... So Alice Springs and Uluru Campervan Trip?! 🚐 Recommendations welcome! 👇 #alicesprings #uluru #ayersrock #campervan #northernterritory #wheretonext
Sydney Bridge Climb! Here we are at the Summit after climbing 4 ladders and walking 1332 steps 🙅 Fantastic panoramic views of Sydney and the Opera House! What a great experience 🇦🇺 #sydneybridgeclimb #sydneyharbourbridge #sydneyoperahouse
Great atmosphere, food and views at Barangaroo Reserve relaxing in the park from 5pm with ciders and Gin! Beautiful way to bring in the New Year with fireworks off the Harbour Bridge and Harbour to enjoy! #barangarooreserve
Wishing all my Family and Friends the best of New Year's! We have so much to be grateful for, the world is at our finger tips, just think where your life will be in another Decade! Sending our love from Sydney with a picture from the Family 9pm Fireworks that rocked my socks (well flip flops 😂!) #NYE #sydneynye
Feeling like Elf in New York But in Sydney! 🎅 How epic is this Christmas Tree 🎄!?! #feelingfestivestill