In the wake of the atrocity in Manchester, it seemed like the best thing to do was to escape to the countryside. As the mister lives in the vicinity of the terrorist attacks, it all of a sudden felt so close to home. Before I continue I would like to express my deepest condolences to the families and friends of the victims and to the emergency services for sheer bravery in the face of danger. Sadly, as I wrote this blog I heard the news of yet another attack on our country has arose, this time at the London Bridge.  There are no words that anyone can say to take the sadness away or turn back time but I hope the stories of kindness, bravery and humanity from the majority of the United Kingdom will shed some light in the darkness we are currently faced with. So we escaped to the country, another country in fact, South Wales in the Brecon Beacons National Park. Seen as the Mister, was working on a placement in Caerleon (near Newport) I thought I would ‘go the distance’ four and a half hours to visit him on a bank holiday weekend. Of course I don’t travel light with a car full of camping gear for a 3 night stay at the Cwmdu campsite. Note: This campsite had great facilities, remarkable views and was a reasonable price! I was proud of our set up featuring the Outwell Carolina Tent, matching carpet, electric hook up, table, deck chairs, gas stove, and a George Foreman grill for good measure. We had glorious sunshine and unbearable heat on our first evening while we made Kebabs overlooking the incredible views.

We had planned to tackle Pen-y-fan Mountain which has the highest peak in South Wales. We parked up at Pont-ar-daf car park and set off in the bleak weather with the knowledge that it would ‘brighten up’ as 3 weather forecasts promised. Unfortunately this was not the case, the rain did not stop and the winds picked up. We saw people under-dressed for hiking turn round and head back as they realised it was not going to be a leisurely stroll – but we ploughed on. We intended to do the circular route or Corn Du then Pen-y-fan. We reached the peak of Corn-du then scrambled up  a rock face to the top of Pen-y-fan. I would love to say it was incredible views from the top but we couldn’t see a thing – just grey clouds. 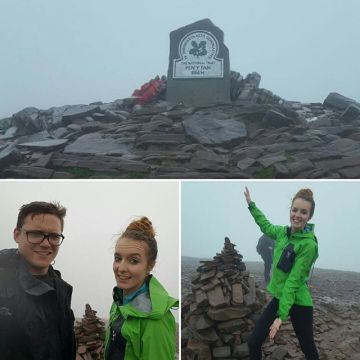 We headed off the side of the mountain after a brief photoshoot to prove we got there! We just wanted to get back and eat our pack up in dryness. It was slippy all the way down but we were just happy we were getting down until we hit a very steep UP! This wasn’t what we anticipated but we went with it and headed UP thinking it will be a little UP and down then we will be back. The moral of the story is never trust women (or just a Chloe) with directions. I was so wrong it was unbelievable. We ended up on the top of what we think was Craig Cwm Sere, with little to no path, following some kind of foot prints while the wind literally was sweeping us off our feet. For a good hour we didn’t see one person up there and we both began to panic in silence. We both were having crazy thoughts. The mister later told me he was thinking about what he would say to my Mother to explain why I hadn’t made it off the mountain, I was worrying about either or us getting injured and having to call out the air ambulance. We held each others hands, communicating by hand squeezes, helping each other across the terrain until we found a cross roads of walkers!

Walkers, hikers, ramblers – whatever you want to call them are honestly great people to chat too. The morale was great even though these people were in the same position as us. They went out with the hope that it would ‘brighten up’ and were soaked through to the core. They were happy to help and try and figure out where we were in relation to where we needed to be… we headed further down with the promise of civilisation. Finally off the mountain side we found ourselves on a farm track with a small shelter – this was the first time we had stopped on our walk and we demolished our emergency Jamaica Ginger Cake (a must have in any rucksack!). At this point, I realised how much I was aching, my knees felt swollen, we were wet through and beginning to get colder and colder as the adrenaline dissipated. The mister sparked up a conversation with a small group nearby – who like us were hoping to enjoy the bank holiday sun. While looking at their map, there advice was to head-back over the mountains as the only way back to our car park – I won’t repeat what the mister said but we decided against that. We told them we were going to head towards the village and get a taxi as they told us we were on the complete wrong side of the mountain.

We set off for the next part of the journey and thought someone in the town will get us back. It was if the group had heard my thoughts when the young lad ran after us and said ‘Can we offer you a lift back to your car?’ Usually people, in particular Brits are too polite/proud to accept help from a stranger but our immediate response was ‘Yes Please!’ We couldn’t have been more grateful for these walkers coming to our rescue and saving us that afternoon. Chris, his father and friend gave us and our dirty boots a lift well out of their way in their awesome VW van because in their words they would ‘hope someone else would do the same for them’. To go back to what I mentioned at the beginning, these kinds of stories genuinely restore your faith in humanity. The mass majority of people on this earth are here to do good, to care and to give-back. Unfortunately, the minority gets the lime light but I believe the light should be shining on these kind souls to drive out their darkness.

We ended our time in the Brecon Beacons exploring the four waterfalls near Ystradfellte on a 5.5 mile energetic walk. Good footwear is a must especially when walking across slippy rocks for the perfect picture – you might go with a thud! The last waterfall was definitely worth the wait as you can actually walk behind the waterfall.

I have often said there are so many beautiful places on our door steps to take advantage of and the Brecon Beacons is a place of true natural beauty. Another eventful and adventurous weekend away with the mister – making the most of every last second of the Bank Holiday weekend.

Go the distance in the Wales,
Chloe

View all posts by Chloegoesthedistance

1 thought on “Escape to the Country: Brecon Beacons”